Life in an egg during the Late Cretaceous period (100.5 – 65ma) was pretty rough, and living long enough to break through a shell and breathe fresh air was definitely beating the odds. If you weren’t snatched out of the nest by predators, you were still very much in danger of being trampled by your own loving family. 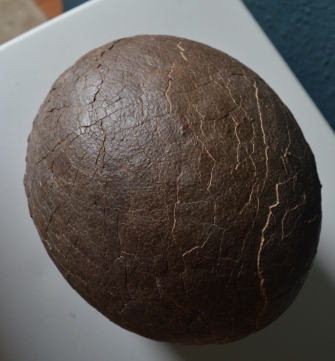 From the moment they hit the ground, dinosaur eggs like the one pictured above were at risk of being picked off. For this reason, most dinosaurs laid a sizable batch of eggs in the hopes that predators would basically get full and go away before they ate them all.

Dinosaur eggs were typically laid in a relatively circular pattern; which likely made it easier for their mothers to brood them and for the eggs to keep one another warm. However, if you were a sauropod you laid your eggs while you walked in a straight line cuz’ you got stuff to do and places to be!

In my opinion, baby sauropods (like Little Foot) by far had it the hardest. Sauropod eggs had to endure being dropped out the back-side of animals that reached lengths of up to 100 feet and weights of roughly 175,000 pounds. The fact that they had to survive a drop of at least 8 feet is tough enough, but if they were stepped on, it would’ve been like having 900 washing machines thrown on top of you.

Mothers of this size could not possibly brood their young due to the fact that they would (A) crush them and (B) devour everything in the near vicinity while waiting. So if you ever find yourself sulking about how tough you had it growing up, just be thankful you weren’t born a brachiosaurus and give your mom a hug.